You are here: Home / Articles / Meet the Referee – Paul Tierney

This week’s spotlight for our man in the middle falls on Paul Tierney, who was appointed the referee for the Queens Park Rangers v Swans Championship game on Wednesday, 21st August 2019. 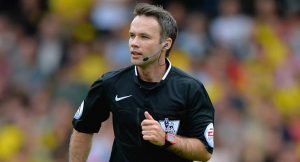 Referee Tierney was assisted by Ian Hussin and Darren Cann, with Matt Foley the 4th Official for the game.

Name: Paul Tierney
DOB: Unknown
Birthplace: Wigan, Lancashire
Interesting Fact: Tierney is a relative newcomer to the Premier League having only been promoted to the Select Group of Referees in the 2014-15 season. Ironically his first ever Premier League game was officiating the Swans v West Brom clash on 30th August 2014.

In summary, Paul Tierney’s record for Swansea City games is as follows:

This referee has a Swans Love Factor of 78%